After my iPad post a few weeks ago, this picture cracked me up.

Is the phrase “T.M. Camp is mine.” either
(a) What the bill collectors whisper when I answer the phone late at night.
(b) The opening salvo in a cease-and-desist letter from the director of a Transcendental Meditation retreat.
(c) The start of a very, very, very nice compliment I received in a recent e-mail.

Last week people on Twitter fought and kicked and clawed to get their hands on free copies of Assam & Darjeeling and Matters of Mortology.

Well, maybe it wasn’t that violent. But thanks for playing along anyways, kids. The books have all shipped. Hope you enjoy them.

And if you weren’t one of the lucky ones this time around, we’ll do it again sometime. I promise. It was too much fun not to.

Don’t forget: If you really, really want to read one of my books you could always buy a copy. All you have to do is click on one of the covers over there on the right.

It’s worth noting that Lulu has free shipping all summer long, Amazon and Barnes & Noble are selling it with a big discount right now. And people are also ordering autographed copies directly. And there’s also a nice, crisp free-to-download PDF out there for each one, too.

Back when my first child was born and I was supremely unprepared for the impact of a new baby in my life, I had a schedule that allowed for four to five hours of uninterrupted writing time every night. It’s almost sixteen years later and, boy oh boy, have times changed.

I have less time now, of course. And I’m way better prepared, having been through this a few times now.

Even so, Sophie is kicking the crap out of me.

Either the extremity of sleep deprivation utterly wiped out any memory of how hard these first months are, or she’s come to earth with powers and abilities far beyond those of ordinary mortals.

All of which is to say that the “forthcoming” joke on the Acknowledgements page of Assam & Darjeeling sounds less and less funny to me every day.

I started a short story just before Sophie was born â€” it’s the next Jee story, as a matter of fact â€” and the baby’s early arrival threw me off kilter for weeks. I did my best to chip away at the story a little bit here and there, but it wasn’t long before my momentum had flagged and I’ve been struggling to get it rolling again.

It’s driving me a bit crazy, to be honest. It’s not writer’s block. I’ve got it all together and ready to go. The story is right there, ready to be written. But it needs the full flood of effort and not the few rivulets I can squeeze out here and there.

(The delay hasn’t been a total washout, however. In the intervening weeks, I’ve made a few discoveries â€” minor things for the most part, little conversations and images scattered here and there. But they were worth the wait, so I shouldn’t complain too much. One bit in particular is something I’m very proud of, although I suspect I didn’t come up with it. Writing, for me, always feels like I’m eavesdropping on someone else, something Other. Metaphysical blog post on this topic to follow.)

Someone asked me about my process recently, specifically how I kickstart something that’s lost traction. Here was part of my answer…

“What works best for me is to start over. If I’ve been away from something for a period of time and find I can’t quite pick it up again â€” even though there’s no earthly reason why I shouldn’t be able to â€” I’ll read everything through as far as I’ve gotten and then do a quick sketch of the story: It’s overall shape, the sequence of events, an inventory of important things to include. Once I have that, I’ll start writing again from the beginning, transcribing my original draft and tweaking it as I go along, referring to my sketch whenever I have something new to incorporate. Usually by the time I get to the end of the previous text â€” the spot where it stalled â€” I’ve got a full head of steam built up again, and I can just keep chugging along.”

Hey, works for me.

Once the new story’s done, it’s time to wake up poor little Pantheon and get it rolling again. There’s a lot of work there, a big book waiting to be written â€” so it’s going to take a lot of work.

And, honestly, I’ve no idea how long it’ll take. I’d like to think I can have a first draft done by the end of the year. But there’s no way to know. All I can do is write as much as possible, as fast as possible.

Well. It’ll take whatever it takes.

Another Reason Why I Hate Summer 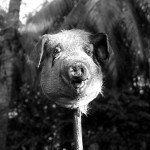 Now that it’s Summer, my coworkers enjoy opening the office doors in the afternoon. This brings in the breeze as well as large black flies and even the occasional wasp. They buzz around my head, retreating to tap against the top of the tall windows next to my desk. Eventually, they come back to divebomb me again. It’s maddening.

I have a deep, intense, and slightly pathological dislike of flying insects.

As I type this, my skin is crawling. I’m like Matt Cable over here.

Speaking of which, I stopped drinking alcohol when Sophie was born. It’s not like I was a falling down drunk or anything, but I probably knocked it back more than most people usually do â€” typically late at night while I was writing.

So, faced with a unpredictable sleep schedule, an increasingly complicated set of priorities, and rapidly evolving stress levels… Well, the last thing I needed was “a psychoactive drug that has a depressant effect” (Shut up, Wikipedia.)

I haven’t really missed it at all. I find that I’ve got no desire for it. I’m not anti-drinking or anything like that. I’m just walking past that aisle in the grocery store now. And it’s become a little bit of an interesting exercise for me, even a challenge. I don’t have a set timeframe, so there’s a bit of “Let’s see how long I can go…” underlying it all. It’s also interesting to see how people react when the subject comes up. Some get a little twitchy and uncertain, as though I’m one Michelob Ultra away from becoming Montgomery Clift.

Really. I’ve just got a baby girl to take care of, after all. I pretty much did the same thing when her older brother and sister were born.

Recently, someone on Twitter mentioned they were reading Stephen King’s On Writing which led to an interesting conversation between a few of us about what we liked and/or hated about the book. I didn’t mention it at the time, but I’d already been thinking about King and his book. Parts of it are surprisingly personal and frankly confessional. I enjoy the memoir aspect of it most of all, and his revelation about his own addiction was startling.

However, one of my main points of irritation is King’s assertion that most (if not all) writers are drug addicts and/or alcoholics. He essentially claims that “we’re just wired that way.”

Call it denial, but I don’t buy that at all.

Tea on the other hand? Now that’s a drug I won’t be giving up any time soon.

And the answer is… 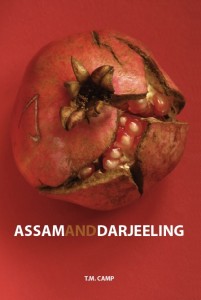 “T.M. Camp is mine. No I’m not a stalker and definitely not insane..what I mean is…well, maybe it’s a little hard to put into words but just like you I have shelves dedicated to Alan Moore and Neil Gaiman and Dave Sim…but everyone…everyone knows them…at least now anyway with the success of movies. But I DISCOVERED “Assam and Darjeeling” on the iTunes podcast. I don’t care if you wrote it and created it…I found you…”

I love getting e-mail like that. Seriously. That sort of thing makes my day.

Assam & Darjeeling is just starting to get out there and the early response overall has been very positive. We’re seeing reviews go up on Amazon and Barnes & Noble, as well as sites like Goodreads and LibraryThing. But more wouldn’t hurt. So don’t be afraid to put your own out there, if you’re so inclined.

And if you really want to help out, go into your local bookseller and ask them to order you a copy. Do it three or four times, tell them how much you like the book and that you’re buying copies for all your friends. Don’t forget to mention how much you wish I’d come to your town for a signing/reading.

Copies are going out to bloggers and reviewers as well. If you fall into one of those categories, you can request a review copy directly from Aurohn Press.

Some very nice people have asked me when my next book is coming out. Having blown through Assam & Darjeeling and Matters of Mortology, they’re reduced to subsisting on The Gospel of Thomas and whatever clever things I manage to say on Facebook or Twitter.

As I said above, the next novel is a ways off. If you listen in to The Gospel of Thomas, you’ll probably hear excerpts over time. And eventually it’ll have it’s own free audiobook/podcast. But we’re easily a year away from being able to buy a copy. Unfortunately.

However, it occurred to me recently that I actually have a few older books that are just a few steps from being ready for the world. I haven’t talked about them much here. In fact, very few people have even seen them. In all honesty, I’d forgotten about them until late last night when I was moving a few things around in my office.

Through no fault of their own, I don’t think about these stories much in the context of the rest of my work â€” although, upon reflection, they fit in rather well. I created them for very personal reasons, as one-off gifts for people over the years.

And there they were: Two books sitting on the shelf all polite and patient, just waiting for me to remember them.

So. That being said, Aurohn Press has tentatively added them to the 2010 schedule. If all goes well, the first “new” book will be released this August.

I should mention that it’s a children’s book, of sorts. A picture book.