When I moved to Michigan in 1996, one of the first things I set out to do in my new hometown was find a comic book store.

Finding the right comic book store is like finding the right church. And more difficult in a town where there is a church approximately, seemingly, within a quarter mile of wherever you happen to be standing.

It’s all about the people. A good comic book store is a place where you can count on the people who work there: They’ll hold your stuff for you… They’ll make suggestions based on what you like… They’ll talk to your kids and give them little toys or comics. 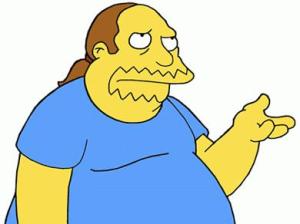 After a few weeks and a lot of really bad comic book stores. The owners were, mostly, the typical stereotype: Guys so loaded down with their own snark that they couldn’t help but sneer at everything, even things they liked. They lived The Simpsons clichÃ© with a remarkable lack of self-awareness.

There was the guy who had a great little shop in the hip pre-hipster part of town with all kinds of rarities, pronounced “manga” properly like he was correcting the rest of the world, and refused to get me something so mainstream as Batman Animated Adventures for my two year old son. But he had no problem putting “recommendations” into my weekly pull bag and expecting me to buy them.

At another shop â€” the biggest one in town and possibly one of the best stocked comic stores I’ve ever been in â€” the guy behind the counter clearly had a large base of return customers with overstuffed pull bags . . . so he couldn’t be bothered to remember my two or three measly issues every month.

To use a technical term, they were all assholes.

I got lucky when someone pointed me towards a little rundown shop called Tardy’s Collectors Corner. The minute I walked in, I knew I was home.

Comic books have been a part of my life since I was very young. I’ve got my older brother Scott to thank for that. He had two big cardboard boxes of comics that I’d dig through, reading them over and over again.

Every so often, I would walk up to the local 7-11 where I’d paw through he rows of comics. I’d buy however many I could with the dollar my mother had given me. Or, if none caught my eyes, I’d get a slurpee and bubble gum. The slurpees sometimes came in collectible plastic cups with different comics characters on them and they were very cool.

I was probably five years old. It was different back then. I wandered around on my own all the time. And they sold comics everywhere: Drug stores, grocery stores, liquor stores, gas stations, toy stores â€” everywhere but book stores, oddly enough.

I remember the first time I went to an actual comic book store a few years later. It seemed… exotic. I’d never heard of such a thing before. I remember the bagged comics hanging on the wall behind the counter â€” stained glass windows behind the altar. 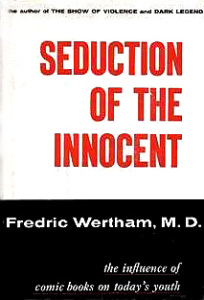 I read an article recently about the social and economic impact of Frederic Werthamâ€™s impact on the comics industry. In the 1950â€™s, 95% of of elementary age kids were reading comics and sales topped 1 billion in sales. Thanks to Wertham and his trumped up witch hunt, most of my friends never read a comic before they met me. And the industry today is struggling with sales of only 7 million.

I donâ€™t know how those numbers break down between Amazon and other online retailers, brick and mortar book stores selling the popular “graphic novelsâ€, and the always-struggling independent comic book stores. But Iâ€™m guessing the comic stores are the ones who are seeing their numbers dropping year after year.

My first comic book store was a place in Orange County, California. Freedonia (after the Marx Brothers movie, of course) was where I bought my first issue of Cerebus. I met Chris Claremont there and he signed my copies of the Wolverine miniseries. I bought Frank Miller’s The Dark Knight Returns there.

That was a good place. I spent years looking for another one in two different states, three different cities. And failing.

So when I walked into Tardy’s, it was a relief.

The guy behind the counter was gruff, curmudgeonly. But he knew his stuff and clearly loved comics. And he had a little twinkle in his eye when he saw my son looking in awe at all the posters and naming each of the superheroes he saw. 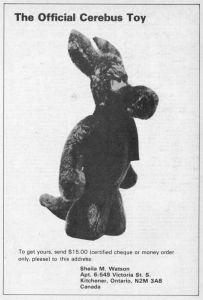 There was a stuffed Cerebus on a high shelf behind the counter. Someone had thoughtfully put a pair of lace panties over one ear, a slightly disturbing but clever little nod to issue #95.

There was a custom sketch by Bob Burden (titled “The Girl with the Radar Shoulder”) on the wall behind the counter. Itâ€™s still there.

And, when my son asked to use the bathroom, I spied a little stack of those old collectible plastic slurpee cups by the sink.

Kirby â€” that was the owner’s first name, I later learned (and is there a better name for a comic book store owner than that?) â€” ran the place with his wife. They were friendly and welcoming, keeping their shop going in a neighborhood that had seen . . . well, maybe not better days but, at least, cleaner ones. Their store was the safe haven. A warm little corner of color and fun.

As near as I could tell, their shop and the bail bondsman on the corner were the only two ongoing survivors in the local retail apocalyptic landscape.

For over eighteen years I’ve been going to Tardy’s. Kirby and his wife have watched my kids grow up. My son, now twenty, has his own pull bag now. My four year old likes Adventure Time. My sixteen year old daughter just bought the first issue of Wytches and the lastest Batman/Superman there. I’m proud of all of them.

Comics are touchstones in my life. So is Tardy’s. 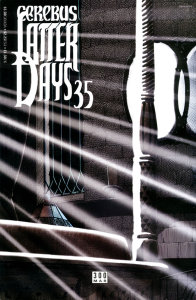 I sat in my car outside the store with each issue . . . having a little wake each time, saying goodbye to characters I’d loved for years.

I bought the first issue (and, then, all the issues) of Promethea at Tardy’s â€” thanks to recommendation from Kirby, of course â€” a book that would end up resonating through my life, beliefs, and work in ways I would have never expected.

The last few years, I’ve seen my share of hard times. Tardy’s has always been there, letting my pull bag go more than a few months past due when money was tight. And, in good times, they’ve always been glad to try and find some rarity or special order for me.

Yesterday at Tardy’s there were a few new faces behind the counter â€” at least, I didn’t recognize them. But that’s probably because, as I’ve gotten older, people tend to blur together a bit.

I didn’t think much of it. Kirby’s staff has fluctuated over the years. There were a few forgettable kids who came and went. But it was cool to see his son working the counter sometimes. Of course, Kirby and his wife were usually, almost always, there. And it’s always a lucky day when my visit falls on the same day when the excellent and friendly Tim â€” the Flying Dutchman of Tardy’s â€” is there. 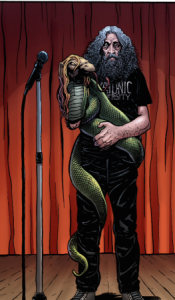 Yesterday, my pull bag was empty (alas) but I found that issue of God is Dead that I’d heard about â€” the one with Alan Moore’s Glycon essay in it â€” so that was good. While Julia helped her little sister find a missing issue of Fiona and Cake, I looked around for some kid-friendly comics to hand out on Halloween.

I overheard the guy behind the counter talking to another customer. He was saying something about Kirby selling the business to him.

And my heart just fucking sank.

Omnia mutantur I reminded myself as I made my way to the front. So it goes.

The guy must have seen what I was holding (or he saw Julia’s comics) and said “Have you read Birthright?”

I hadn’t. He gave me a quick synopsis and it sounded like something I’d like. So I went and grabbed it.

While I was paying, I had to ask: Were they really buying the place?

They were. The two of them â€” Gavin and Deanna â€” were long time customers and, when Kirby started talking about retiring and selling off the stock, they stepped up and worked out a succession plan with him. It’ll take a couple of years but, in the end, the store will remain.

Somehow, taking with Gavin, my dread shifted over to relieved optimism. He’s enthusiastic and friendly, he’s got good ideas, and he clearly loves comics. He seems cut out for the challenge of keeping a somewhat anachronistic business in a marginalized industry up and running.

One can only hope. If (fingers crossed) things work out, Gavin and Deanna just might be selling comics to my grandchildren.

Thanks, guys. May your gods bless you.

I’ll see you next week.