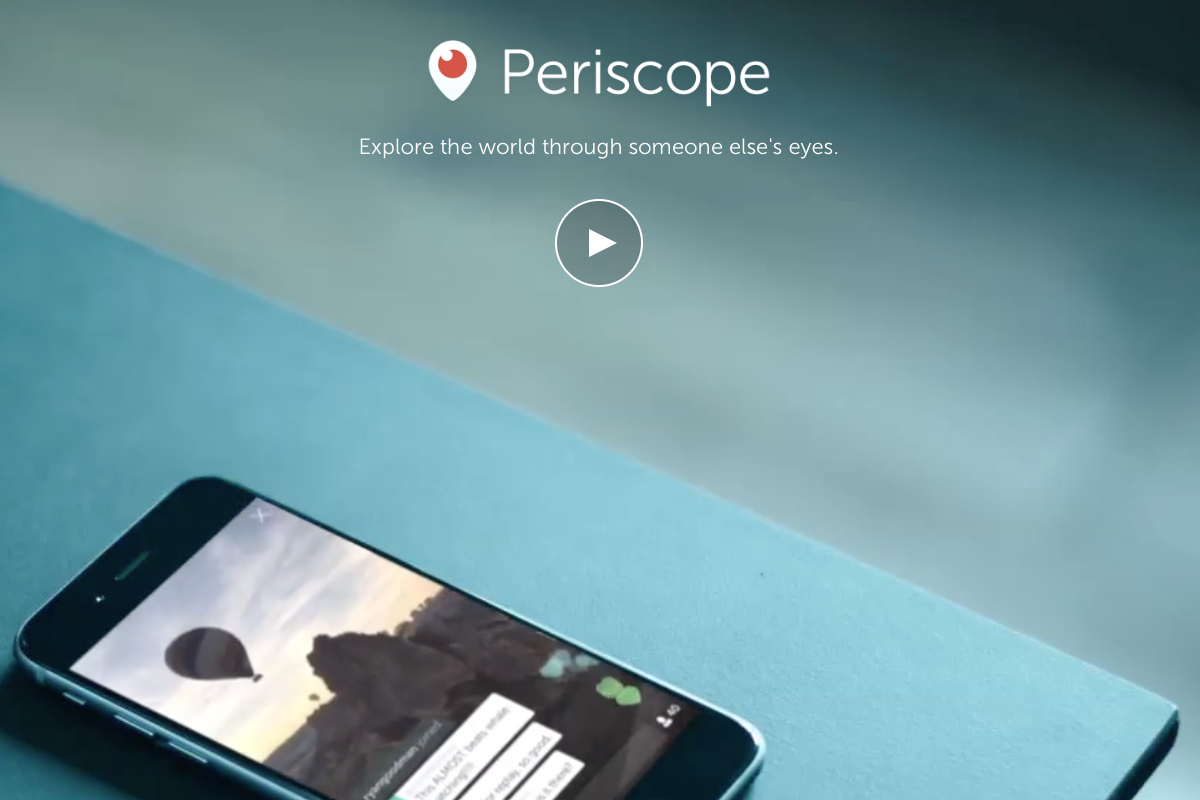 Iâ€™ve talked about this before, but the latest surge in popularity for live video streaming apps like Periscope has reminded me of the digital clock I used to watch from my bedroom window late at night:

â€¦and when I was young, Iâ€™d look out my window at night. There was this flashing clock on top of a building that I could see from my window. It flashed all night long. I used to watch it, counting. Seeing how long it would go on . . . just flashing the time away. Iâ€™d watch this from my window, when I was young. And sometimes Iâ€™d wonder, how long it had been going? How many years had it been there? How long would it keep going? And, maybe, thousands of years from now will it still be going? When everything else is cold and still, and the only sound is the wind blowing through an empty world. Will it stil be there? Flashing? And will it still have the exact time? And when it stops, finally, when itâ€™s done, what time will it be?
â€” from Drawing Away

Apparently we never entirely shake off some of those little high school quirks â€” at least, maybe I didnâ€™t.

Years ago, when I clumsily fired up the first version of this site, I had a little webcam that would deliver a static live snapshot every 30 seconds of whatever I was doing at the time. I usually left it on late at night when I was in my office writing â€” an odd blend of narcissism, introversion, and loneliness.

Over the years, the webcam captured a lot of unintended moments, like me obliviously singing my heart out… 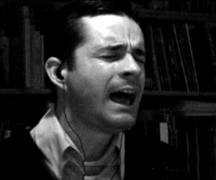 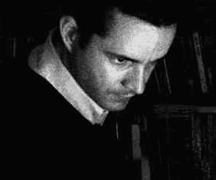 It was a little one sided, but somehow it touched that same little nerve that watching that clock used to do for me, all those years ago.

Staying up late when the rest of the house is quiet is something that Iâ€™ve been compelled to do since I was very young. I can remember being four or five years old and sitting up in bed, reading long into the night.

I have always loved being awake in a sleeping house. The secrecy of it. That stillness, the privacy. The selfish solitude of bare feet and cold floors.
â€” from The Whispering Boy

At a certain point, the night takes on a surreal quality and itâ€™s difficult to shake the feeling that you are, in fact, utterly alone in the world.

That isnâ€™t always a bad feeling. In fact, it almost never is.

But the clock reminded me that I wasnâ€™t alone. Sometimes I would sit and fantasize about who else might be out there, awake in the night, watching it from their window.

When I joined Twitter, I immediately recognized that old familiar cocktail of narcissism, introversion, and late-night loneliness. It was like coming home. 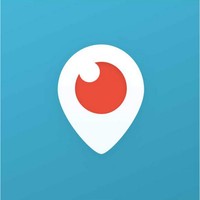 A few weeks back I got wind of Periscope and, once again, I was instantly mesmerized.

Quickly, hereâ€™s Periscope in a nutshell: Itâ€™s a mobile app that allows you to share live streaming video straight from your phone. People can watch your feed, post comments in real time, and tap their finger to give you â€œheartsâ€ (imagine if you could click the Facebook â€œlikeâ€ button over and over again).

The potential impact of Periscope on every aspect of our culture was immediately obvious to me and I could not stop talking about it to everyone. 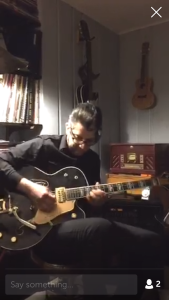 The countless pre-teen girls crowded around their phones on a Friday night saying â€œAsk us anythingâ€ â€” horrifying.

The bands, practicing set lists in their basements and living rooms â€” awesome.

The writer side of my mind was working overtime: Broadcasting live readings, holding Q&A sessions with my fansâ€¦ Forging immediate connections with new readersâ€¦ Setting up a floating â€œsalon” of like-minded writersâ€¦

So many great ideas to explore. At the very least, it gave me a new way to mix up my cocktail â€” but, better than the old webcam, now we can interact with each other.

Mostly, Iâ€™ve just been telling ghost stories (true ones) or I only sit there and write while people watch and, in time, lose interest and leave.

I work in Advertising, so Periscope represents a whole other world of opportunities and issues to explore for my clients â€” but thatâ€™s a different blog post for a different website.

More importantly, I have become obsessed with the immediate and profound sense of connection that Periscope provides.

Another writer called it â€œteleportationâ€ â€” the ability to be anywhere in the world. Someone in the UAE can walk down the street and give me (and everyone else) a real time look at life on the other side of the world. A side of the world that, admittedly, people in my country sometimes tend to demonize or disassociate from. But Periscope broke down those boundaries. 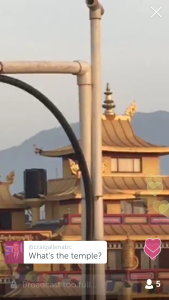 New York, Dubai, South America, the UK, Nepalâ€¦ I started looking for as broad a range of people and places that I could find.

One of my favorites is @neilpande. His broadcasts of the sunrise and sunset in Kathmandu are stunning. As is his own enthusiasm for the world he lives in. I can’t help but be swept up by it all. The connection is so strong that, when I woke up to the news of the earthquake this past weekend, I immediately thought of my â€œfriendâ€ there and checked to see if he was okay (he is, but the devastation and tragedy there is staggeringâ€¦ please help if you are able.)

That point of connection, the awareness of a single world and the ability to see it all . . . amazing.

One feed I ran across was titled â€œAwake, Cancerâ€ â€” just a darkened room, a digital alarm clock on a nightstand. And a flood of comments with love and support from strangers all over the world.

I watched a snail in France crawl across a leaf. 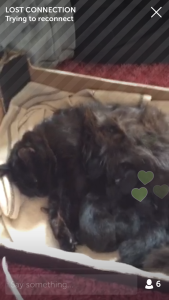 Another time I had the good fortune to see â€œMama cat having kittensâ€ and watch as, halfway around the world, a litter was born in the UK. The mama cat was named Snickers so everyone suggested candy bar names for the kittens. Iâ€™m proud to say that somewhere in England there is a kitten named â€œTobyâ€ because of me (short for Toblerone).

Thereâ€™s a flip side to all of this as well, of course. And it can get a little ugly.

Politics, journalism, law enforcement, celebrity, sexualityâ€¦ all aspects of our culture are bound to mutate under the gamma radiation of a live worldwide video feed.

As I started getting more and more obsessed, I made all kinds of predictions. â€œItâ€™s only a matter of time,â€ I told my remarkably patient family and colleagues. â€œSomeone will broadcast a terrorist attack. Someone will commit suicide. Or a drive by shooting. Or a sexual assault.”

These things are bound to happen. Because the potential is there, for good or ill.

A few days ago, I found myself watching with equal parts admiration and dread asÂ @paullewis of The Guardian UK ran a live feed from the midst of the protests in Baltimore following Freddie Grayâ€™s death. I was watching, in real time and more or less unedited, an event that otherwise would be delivered to me in heavily produced and commented soundbites.

There was a freedom there but I was also well aware that Iâ€™d added a dash of voyeurism to the cocktail. 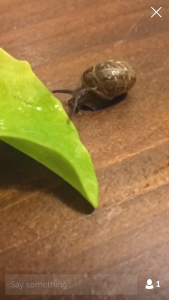 I donâ€™t know where Periscope goes from here. I think it has staying power and relevance. Itâ€™s strong enough that Iâ€™ve had to curtail my own use, because it was distracting me from my work.

As excited as I am to explore the possibilities, Iâ€™m equally enthusiastic to see how other people put it to use as well.

But mostly Iâ€™m just glad to have something that can remind me, when I’m wandering around the house in the dark hours of the night, that Iâ€™m not the only one.